In a fitting end to the season, the Autumn Classic event headed back to the birthplace of the ever-popular Gorricks, Crowthorne Woods. Here a mere 17 years ago an idea was born to provide quality events for off-road riders of all abilities and ages, and they're still going strong!

Despite, as our Scottish brethren would say, "driech" condition, where it was neither wet nor dry, just moist under grey skies, the 2nd of the Autumn Classics attracted nearly 500 riders from far and wide. It was brilliant to see not only plenty of Gorrick 'regulars' but also masses of 'newbie's' keen to take part in some fun mountain biking with plenty of likeminded others. With plenty of rain falling in the preceding days you'd have not been too wrong to assume the worst and prepare for a muddy slog. However such is the magic of Gorrick events, (aided and abetted by the local geographical conditions of course) the going round the 4.5 mile course was in truth actually good to firm, with only a couple of moist patches and a few deep puddles to prove it had in fact rained at all in the area recently! 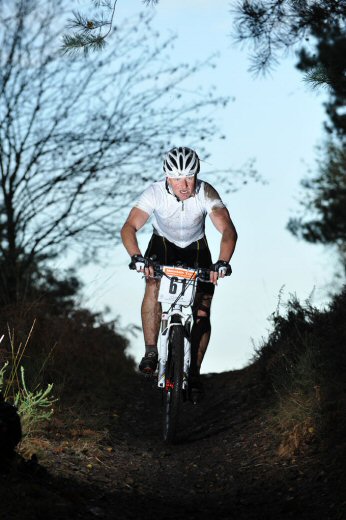 Marc Chamberlain plunges into a darkening
thicket as winner of the Sport race. Photo by Joolze

Crowthorne is always a popular venue, combining some short sharp uphill efforts with masses of fast flowing singletrack, loads of fun technical sections such as the fabled 'Corkscrew' to keep riders on their toes, providing masses of grin inducing riding. The real sting in the tail has to be the cruel short uphill start, guaranteed to get your blood flowing in a short space of time before you plunge headfirst onto a fast fire road descent, giving you the chance to catch your breath before cruising into the first of many smooth singletrack sections. The Gorrick crew like to finish as they start providing yet another sting, bringing you tantalisingly close to the finish line before diverting you out for a quick hard burst, before allowing you to plunge back into sight, where you have to tackle a flurry of tight loose corners, before heading off to do it all again!

Once more it was the youngsters who had the pleasure of tackling the course first and again it was brilliant to see so many young eager faces, with plenty of girls mixed in too all keen to get into the thick of the action. Martin Turton made short work once again of his Youth race taking a comfortable win ahead of Ben Hawker. While Juvenile Joe Broadhead repeated his winning style once again coming home in top spot. Gretel Warner held off rival Sveva Marais to take the win in the Juvenile female race. Loads more riders braved conditions and an early start to tackle one lap in the Beginner's race with Anthony Ward completing his lap in just under 29 mins to take the win. 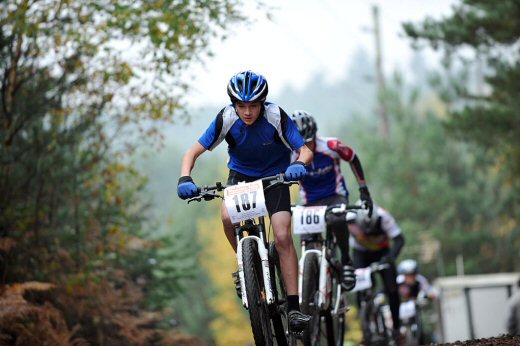 Joe Broadhead strung the Juvenile race out from the start and was never headed.
Photo by Joolze

Next up were the Super cats of Masters and Vets, along with standard Masters and soon the trails were awash with a fresh intake of eager riders, cutting a dash through the high swathes of bracken lining the trails. Despite a worthy challenge by Mark Hutt, Scott Forbes resplendent in his National Champion jersey made short work of his four laps taking the win, building up enough of a gap to stop and have a quick chat with the author [that's Joolze of course], before hot footing it to the finish! In the Super Vets, eventual winner John Smith had a slightly harder battle on his hands, as rivals Lewis King and Daran Blackwell were determined to scoop the victory for themselves. Just 59 seconds separated the three in the end, with Smith taking gold ahead of King. 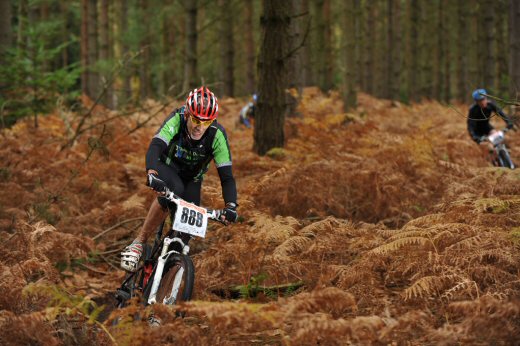 Ian Petherbridge had a tense battle to win the Grand Vet's by a mere 13 seconds.
Photo by Joolze

New for this year was the addition of the Senior Vet category (aged 60+) to give the younger Grand Vet's a chance, but proving age is just a number as both categories were well supported and keenly fought over. Ian Petherbridge had a tense battle with Clive Ely in the Grand Vet's. Over their three laps just a hairs breath separated them and Petherbridge emerged victorious just 13 secs ahead of Ely. In the Senior Vet's Denis Boltwood had a slightly easier but no less hard fight on his hands taking the win with a more comfy margin of 85 secs from runner up Andy Smith. Cutting a lovely if not lonely path was solo Grand Vet lady Viv Hazelton who despite the lack of competition still rode at 100% taking on the youngsters in the women's Vet race, where she would have finished second behind winner Jacqueline Easton.

A much stronger field of women popped up in the Open race with 12 ladies battling it out for the top spot. That honour over two fast laps went to Kathy Beresford with Pippa Alford and Cathy Thomas in hot pursuit taking the runners up spots less than two minutes later. In the popular Open men's race Ed Rose headed the 90 strong field to take the win, while team mate Natasha Barry took another win for Progression Fitness in the Sport women's race. 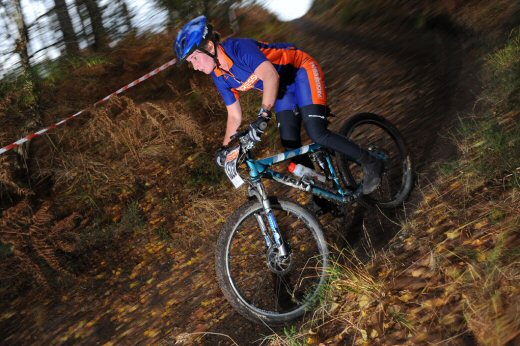 Natasha Barry took another win for Progression Fitness in the Sport race. Photo by Joolze

Nearly 100 riders decided today would be 'Fun' as they lined up in said category to take on the two laps. Phil Wellard had the best start and managed to keep his lead despite a strong challenge by Duncan Coutts and Justin Radford, a mere 29 seconds separated the three at the end. For the Expert riders, all eyes were on Jon Pybus and Gary Record, after the first Classic at Tunnel Hill where Record took the win. Would we see Pybus pull out the guns or would Record manage to pick up a clean sweep. Over five long laps it was clear that Pybus was smarting after his defeat at the last race and was keen not to repeat that outcome, putting down the hammer early on to open up as big a gap as he could. Record did what he could to respond but Pybus had the upper hand and took the win with a comfortable margin to mark his return to good form after a season out through injury.

It was another resounding success with even the sun and a glimmer of blue sky being spotted towards the end of the event. Fear not if you think you've missed out, the Gorrick Spring series will be upon us before you know it, with the first round of XC frolics taking place on the 17th January. If you don't want to wait that long for a competitive MTB fix, have a gander at the brand spanking new Merida Brass Monkeys Enduro Winter Series, the first one is just at the end of the November. Put together with our friends at the Army Cycling Union. Gorrick folk will be around to give a hand and expect everything and maybe a bit more of what you'd expect at a Gorrick! For more details check out  www.meridabrassmonkeys.com or www.gorrick.com.

PS: Joolze would love to include more rider comments, but as she's stuck in the woods taking photos, she finds it a bit difficult. If you'd like to tell her or us how you got on please email us by Monday after an event or find her in the woods, she'd love to have a quick chat!! You can reach Joolze at info@joolzedymond.com or Gorrick at info@gorrick.com.

"I'm using these as part of my winter training really, nothing serious just a bit of fun. I mean yesterday I went to Afan with a bunch of mates and had a 5 hour blast round there, so I'm backing this race with that hard ride. But it's all good. This time of year it's really hard to get motivated, so these races are a great excuse to get your best race bike out and do some hard riding. The Gorrick's are just brilliant for that. I'm lucky too in that I only live 10 mins down the road so this is my training ground. It's nice to come here to an event and catch up with everyone have a good ride and push yourself harder than you would do normally if you were just out training this time of year.

Master's is a tough category with lots of top guys riding at the moment making a really competitive field, every so often you have a good period in the race and you think okay I'm going to ride hard this lap and hopefully next lap I can ease up a bit, though you can't afford to ease up too much in Masters these days. There was a time when it wasn't that competitive but over the last couple of years a lot of riders have dropped down from the Elite and Expert classes to ride Masters.

Mark (Hutt) was giving me a real run for my money to start with, he's a phenomenal rider, incredibly strong and I spoke to him before the start of the race and he admitted to being pretty tired after a really long season, so I managed to lose him and get on with my own race in the end. It was a good day for me for definite, I just love the Gorrick events, I have a weird job which challenges my training and meeting up with other riders so doing these means I get some good solid racing in my legs and I get a good natter with other riders too along the way." 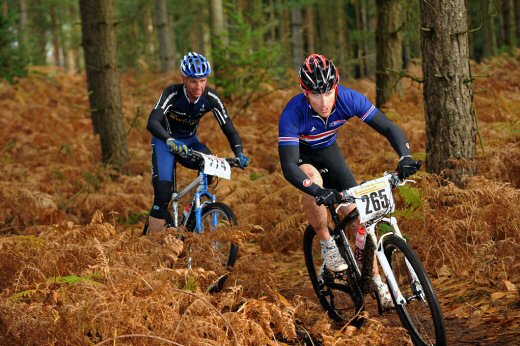 Scott Forbes focuses on the trail, ahead of season long rival Mark Hutt. Photo by Joolze

"That was slightly easier than last time, for me at least, I think I was riding too low at the last race so I put the saddle up and that seems to have made a difference. I thought the course was a bit tamer than the last one, quite free rolling but it obviously suited me more for some reason.

I made sure I was out in front on the first two laps and put all my effort into taking early control of the race and then I eased off the gas a bit, the last lap I was cruising round as I knew I had a comfortable lead. My winter training has only just begun and coupled with the fact I've been off for most of the season after breaking my shoulder at the Nationals, these two races have been helping me ease back into the saddle so to speak. After the last race I was so determined not to lose this one. I was also hoping there would be a few more riders for a bigger challenge, but it was still a good race. Maybe the Spring Series will see a few more Experts venture out and give it a go."

"That was a lot different to what I'm used to, which is lots of big uphills and lots of really fast downhills, this was so much flatter with lots of pedalling which really killed me! Me and a mate came over from Caldecott, South Wales as we thought it would be a laugh. We definitely had a good crack out there, but I wish I'd put different tyres on as they really slowed me down I reckon. I swapped them over thinking there'll be a lot of mud here like there is back home, but there was hardly any here. I enjoyed it though big time, can't wait to come down here again and have another go, I think we've signed up for the Brass Monkey in two weeks, with a few more friends so that'll be a good laugh."


Our Events
Fundraise for

How can you help?